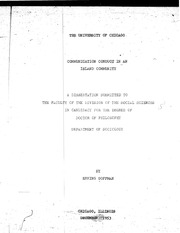 IT WAS SUGGESTED that the actor, as a participant in the game of concealment and search, exerts self-control over in­formation about himself which he provides to others. Whether properly or improperly, whether he is or is not detected in his effort, the actor guides some of his communications by an appre­ciation of their likely effect upon the persons who receive them, this appreciation being guided in turn by the indications that recipients make of the response a proposed line of action will evoke from them. Spontaneous expression of feelings is partly inhibited and appropriate feelings are, in part, conveyed. Ac­commodation, working acceptance, and tentative harmony are the usual result. If a working acceptance cannot be managed, embarrassment, ill-ease, and confusion are often the result. With­drawal, conflict, or abrupt alteration in relationships may also occur. In all of these cases, however, the individual knows that he is communicating and knows to whom he is communicating. Although he may be unaware of all that he communicates, he is in a position to exert discretion over a part, at least, of what he conveys, and he is in a position to make use of what he can learn by examining closely the indicated response of recipients to him. If he is not able to exert prior calculation over all that he conveys, he is at least in a position to benefit from a similar incapacity on the part of those who respond to him. Thus, whether we examine cases of working acceptance, withdrawal, con­flict, embarrassment, or shift to alternate bases of treatment, we find the general factors of awareness and partial control.

There are a number of marginal situations, however, in which the general factors of awareness and partial control can­not operate, or are not allowed to operate. In these situations, the actor finds himself under direct observation of others but is not in a position to modify his behavior by means of indications of the response he is calling forth from them; corrective feedback is not possible. The strategies which the actor usually employs to protect himself, to protect those about whom he is talking, and to protect the interaction itself, cannot be employed. We shall refer here to indelicate communication arrangements.

One form of indelicate communication occurs in those ­professional-client relationships for which certain forms of social irresponsibility are heavily institutionalized. Priests, psychiatrists, and lawyers convincingly guarantee a client that certain kinds of reprisals and moral judgments will not be made, no matter what the client conveys to them by word or deed. It is in the client’s self-interest to be honest and frank, while at the same time the professional defines himself as someone who cannot and does not take offense. In such a context, it is pos­sible for the client to maintain, of his own free will, a communication situation which is so counter to his ordinary protective strategies as chronically to cause him embarrassment.

The two forms of indelicate communication that have been considered—the first where a person is allowed to be untactful and the second where a person is not allowed to be tactful—in­volve communication situations where the usual amount of stra­tegic control over the linguistic components of messages does not prevail. There are a number of allied forms of indelicate communication which differ from those mentioned in that the sender is not aware that he is not employing the usual amount of calculation and control, or, if he is aware of his lack of con­trol, he is free to exert control yet incapable of doing so.

In Dixon it is a very common practice for persons in a cottage to look out of the kitchen window every ten or fifteen minutes or when they hear the croft collies barking. In this way, the inhabitants have ample warning of the approach of anyone, and they have time to arrange themselves and the room so that the image of themselves which they wish to communicate to the visitor will not be contradicted by what the visitor sees. This mechanism of forewarning is apparently possible because there are no trees and frequently no neighboring buildings to obstruct the view from a window. A visiting crofter therefore feels that the warning of a knock on the door is not necessary, and frequently neglects to knock. (The visitor may, however, make a slight pause or shuffling sound before entering.) Since the rooms in a crofter’s cottage have very little light, it is possible to observe the approach of a visitor without the visitor being able to discover that he is being observed. Crofters enjoy the practice of comparing the facial expressive behavior of a visitor just before he enters the cottage with his behavior just after he enters.

In the primary grades in the Dixon school, pupils some­times have to withstand scrutiny by visitors. In some cases the stimulus of “personal interaction” with strangers is too much for the pupils to handle with equanamity [sic]; at the same time the “news value” of a visitor to the school may be too great to allow a pupil to turn his attention elsewhere. Some pupils em­ploy the solution of covering their faces with their hand to shield themselves from the gaze of the stranger, while at the same time examining him through the small openings between their fingers.

An interesting complication in these indelicate communication arrangements occurs when an individual is being spied upon or overheard, knows this to be the case, and tries not to shatter the illusion of the irregular recipient. In this case, the sender may feel that he is in an excellent position to de­lude the recipient in any desired direction, presumably on the grounds that the recipient will not exercise customary scepticism [sic] in regard to what he oversees or overhears. This constitutes a kind of bluff.